In the Home Stretch!

All right, I'm at 43,677 words. Slightly behind but, well, I've been sick, and I did the cooking for Thanksgiving. I took some time to recover!

I've found that, being something of a crazy dog person, I frequently add animals to my writing. Dogs, more often than not, but horses factor in as well. A lot of the time, when I read a book, animals feature in it, but sort of as accessories. Window dressing. They might as well be plaster book end animals, or pillows.

I try to look at these matters differently. 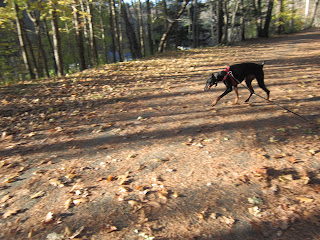 For me, Elka the Doberman (pictured above) is something of an accessory. Bedwarmer, carrier of bottles to the kitchen, provider of amusement...this is starting to sound like a dog might be worth more words than "the dog came along" "the dog sat", etc. The thing with an intelligent breed like the Doberman is that they're rather like having a 2 or 3 year old child around, who can't quite communicate with you the way they would like. It may (but I hope not) come as a surprise to you, but animals have minds! And wants! And, to be avante garde, or perhaps just anthropomorphic, feelings.

So, when I include a dog in a story, that dog is going to be a character. Minor still, as I haven't broken that barrier into the talking animal genre just yet, and certainly not the mixed mess that would be animals and people talking to one another. But the dog will have motivations that the other characters don't necessarily get, and have a personality that is expressed through action and reaction, vocalizations and body language.

Looking back on this year's NaNoWriMo, I realize I'm guilty of having made the horses just accessories, vehicles from Point A to Point B in the opening passages. Really, it's been so long since I've spend any time with a horse, I've lost the knack for remembering their personalities. That, and the place I took riding lessons briefly (a few lessons a summer for several years) had horses that were used over and over by many green riders, and so were more or less bomb proof. There were a few exceptions, and I should have referred to them when writing the horses this NaNoWriMo. Well, if I get to the end of the story and need more words, I'll just have to go back!
Posted by Jennifer R. Donohue at 2:32 AM