This is not a picture of Optimus Prime. This is a picture of Elka.  "Silly Jen, I know that," you're thinking. Or some variant. 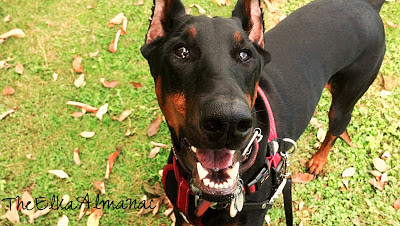 However, I do not own the pictures of Optimus Prime ("Prime" to his pals) and thus don't want to step on anybody's toes. Especially when what I'm asking you to do is go vote for him in a photo contest.

You see, Modern Dog Magazine is having a Star Dog Photo Contest, and Prime is number....10ish. He's been number 9. I'd love to see him number 1, so I'm spreading the word.

He's a 4 year old red Doberman. He's a Canine Good Citizen, and also a Certified Therapy Dog. As I have "known" his owner online, I can vouch for the geek cred; they've also got a black German Shepherd mix named Rogue, and a white Husky named Zelda. Come on, any one of those details is worth a vote, right? You can vote every 12 hours, I've been told (this has not always registered for me), so let's get Prime's numbers up!
Posted by Jennifer R. Donohue at 12:00 AM