Dénouement:
1. The final outcome of the main dramatic complication in a literary work.
2. The outcome of a complex sequence of events.

So, there are a few days left of Camp NaNoWriMo, but I'm effectively done. I reached my July word count goal of 35k, bringing my current word count total for The Last Song to 70k. Not quite "long enough", but it isn't quite done either. I'll see what total I reach prior to the actual closing of the event, and verify at that point. 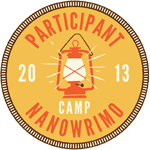 My actual progress has slowed in the past couple of days. I've been laying fewer words on the page, but I want this particular part (the rock star actually leading his wife out of Hades, effectively) to be as correct as it can be. I don't want to clutter it with crap that I'll have to trim out later because it was purple or redundant or overblown. I want texture, not filler.

Detractors of NaNoWriMo seem to turn their noses up at the word count frenzy. They seem to think that people end up with a mess, an incoherent mass of words, just words, that can never be a proper novel. Considering the NaNoWriMo participants who have, in fact, gone on to have their books published, I know that isn't true for everybody. In general, I know it isn't true for me. I also wonder, sometimes, how much writing the detractors get done. Which is worth more, a shitty first draft of 50k words that needs to be both cut and expanded, or a novel one has been meticulously writing for five or more years with no end in sight just more time spent in the salt mills? Once done, and edited, published, and in peoples' hands there might be no difference. "But I'll know," the author might say. Yes, you'll know the process by which you got there. But you can only judge for yourself the weight of your sweat and blood and tears on the page, not somebody else's.

Anne Lamottt, in Bird by Bird, talks about shitty first drafts and giving oneself permission to write them.

Hemingway once said "There is nothing to writing. All you do is sit down at a typewriter and bleed."

You can look at the NaNoWriMo forums and see that at least one portion of it is rife with ways to "cheat". The "Reaching 50k!" header specifically has pages-long threads on what methods people use to bulk up their works. Not using contractions, having characters who stutter or only say first and last names, characters who are writing the college papers the authors are also writing so that just gets included (what a meta nightmare). But not everybody writes a novel during a National Novel Writing Event to cheat a novel that nobody will ever read. There are people who research and fact check and agonize over story arcs and character decisions. There are people who develop their writing rituals during the month, the niceties of putting butt to chair and emptying words on the page.

Proponents of National Novel Writing Month, and even Chris Baty in his book, talk about "quantity versus quality". You know why they do that? They want you to chill the fuck out. They want you to get words on the page and worry later about every last semicolon. They want you to, for the love of God, give yourself permission to write anything without worrying about it being perfect before it's even out of your head. Don't be paralyzed by the thought of an audience. Write for your story and yourself. Worry later. Dress it up later, when you edit, and have a beta reader, and get critiques. Worry later, when you're crying and drinking rum over the fucking query letter and which agents to send it to and what's your market, anyway?

Go out there, and write. Please. Just write.
Posted by Jennifer R. Donohue at 12:00 AM