I'm one of those people who hopes to always have a tape deck. I have mixtapes I made through the years, things on cassette I have access to in no other medium, that kind of thing. And when I heard the premise of Libby Cudmore's The Big Rewind, and saw the cover, I knew I had to read it.

(Disclaimer: I also know Libby; she's one of my few in person Writer Friends)

The Big Rewind takes place in Brooklyn, amongst the hipsters. The narrator, Jett Bennett, gets a piece of her neighbor KitKat's mail by mistake and when she goes to KitKat's apartment to return it, finds her body. The mail is a mixtape, and pretty much Jett's best (...pretty much Jett's only....) clue.

Of course, Jett has to listen to said mixtape first, and while she has a turntable for vinyl (have you noticed vinyl's sudden modern comeback? I only noticed it recently myself. And now own a turntable of my own, and some records.) 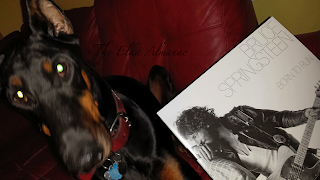 Music permeates the book, and even though the music is not all "mine", it really gave the novel a sense of place, and brilliantly highlights the way music can entwine people and times in your life. I know they (scientists?) say that scent is one of our most powerful memory tappers/enhancers, but I think for some people, it's music. I feel like music works on my brain and my memories like nothing else. So of course, Music As A Plot Device™ worked magnificently here for me. Jett follow's the musical connections between the people in KitKat's life and the mixtape, while also exploring her own musical connections with regards to past (and present!) relationships. It's a murder mystery, but doesn't focus on just the murder mystery, and I feel like the story threads balanced well and were handled brilliantly.

As I read it, I did a little bit of livetweeting. And because I've seen people use Storify to good effect, I went ahead and signed up for an account and pulled those Tweets for you to peruse (okay, so there's only like, six of them, but I blasted through that book in a day): Jen reads #TheBigRewind. And, as a bonus, if you have a Spotify account you can listen to The Big Rewind (Libby Cudmore) playlist.

If you like music, hipsters, Brooklyn, and murder mysteries, or any permutation thereof, I suggest giving The Big Rewind a shot. I enjoyed it, and wonder if there will be further Jett adventures in the future!
Posted by Jennifer R. Donohue at 6:16 PM