Daniel Swensen, at Surly Muse, among others, is having a blog hop contest! The photo that was the writing prompt was really freaking cool and I just had to do it. I need yet another copy of Stephen King's On Writing like a need a hole in the head (I was up to 3 or 4 and think I'm down to 2 or 3, after giving one to a coworker who had none), but that's obviously assuming I place. Plus, I'm a sucker for writing prompts!


Write a piece of flash fiction, poem, or song (300 words or less) using the photo [below] as your inspiration. Post it on your blog anytime between now and when the link closes. Every eligible entry will qualify for a chance to win one of the prizes listed below. Links will close for submissions January 30th. Lillie, Angie, Angela and I will then read, debate, and decide on five winners for the following:
1st: Fifty page critique by Lillie McFerrin
2nd: Twenty-Five page critique edit by Angie Richmond
3rd: Fifteen page critique by Angela Goff
4th: Ten page critique by Daniel Swensen
5th: A copy of Steven King’s On Writing
Winners will be announced February 7th. 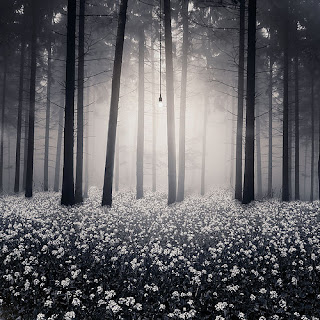 There was a light in the forest.
No really.
Some hunters found it first, but nobody went to check on it. Truth be told, hunters were known to see a lot of things, be it brought on by buck fever or Budweiser. But no, the local Boy Scout troop found it as well, and that lent credibility.
Authorities trudged out to the scene, far from any road. They were trailed, conspicuously, by members of the press, and kids skipping school. Most of town, really. They all saw the light, yellow beams filtered through the dark branches. Then the pale flowers, gathered in the glow of a single bare bulb, hung in the middle of the clearing.
The mayor, some town board members and the sheriff stood and stared up, necks craned. Other than being in the middle of the woods, it was just like any other lightbulb they'd encountered in their lives. It didn't make any noise. It didn't burn white hot. It seemed kind of comfortable, really, a nice light in a formerly dark place.
It seemed safe, so they let people come and see. Everybody stared at the light until they saw bright floating spots when they looked away, peering through the trees as though perhaps there would be more, some kind of renovation that Mother Nature was in the middle of. No animals came.
After a month of front page headlines, and then the national tabloids, and a few newscasts, the light became commonplace. There was talk of merchandising it some way, maybe changing the team mascot from the desultory Knight to the mysteriously charged Lightbulb, but the student council voted it down.
As the months passed, the visitors tapered off. The snow fell, and people moved on to other things. Unseen, the light went out.

Posted by Jennifer R. Donohue at 2:25 AM