One of my favorite things to do for dinner is to throw some kind of Protein in the crockpot before I go to work, season it appropriately, and come back several hours later to something that I pair a starch and veggie to and serve.

You can do it with a whole chicken, which is kind of cool. You can make pulled pork. Most frequently, I'll get a likely slab of beef, liberally garlic and black pepper in it, and voila. I salt it on the cutting board when it's done cooking and whispers apart when fork tines touch it.

One night, I pulled the beef out of the crock pot and it maintained its structural integrity for the ordeal, unusual in and of itself. When I laid it on the cutting board, it looked like this: 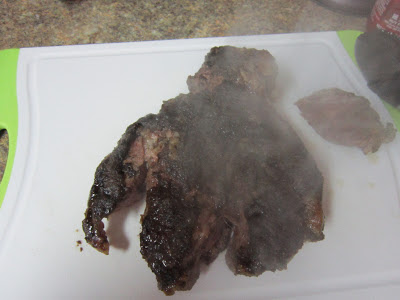 My fiance and housemate were in the next room, and I said "Hey guys, you know how people see the Virgin Mary in toast and stuff? Well, the roast looks like Cthulhu."

My fiancé, dear heart, came to look. "Holy crap, it does look like Cthulhu."

We stood and admired it for a few moments, and I took pictures (they pretty much all look like that one.) We asked said housemate if he was going to come and see. He said "No thanks, I'd like to keep my sanity."

(for reference, the title quote translates to "In his house at R'lyeh, dead Cthulhu waits dreaming." You can read Call of Cthluhu by H.P. Lovecraft at hplovecraft.com. You can also listen to it read on Youtube, which is freaking cool.