I know you're all very surprised, I'm doing NaNoWriMo this month. And can I say how goddamn delighted I am by the SPAAAAAAAAAAAAAAAAAAACE theme that the flair has? I already bought a participant t-shirt, and I'm debating on when to order the winner shirt (I haven't won yet, but....)


I'm not writing a space novel this year (though I did last year!). No, this year I'm writing the sequel to the novel that I wrote in July for CampNaNoWriMo. I really liked those characters, actually, though I will confess that bits and pieces of their personalities and tics may or may not come from characters I've played, and may end up in some way familiar to people who were in those games with me. Other things, most things, are fresh. But, in July, the novel was a cyberpunk diamond heist carried out by three young independent women. This month, the novel is two of the three, and something to do with militias and hijacking army supplies and what they spent their money on from all those diamonds. Because the characters don't know yet, I don't have to know yet, isn't that great? I think that's great. 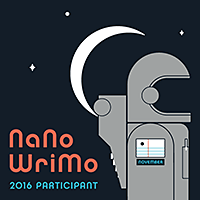 Both novels are in third person limited. The character who was the narrative point of view in the first book is the one who isn't appearing in this novel (or at least I don't think she is ,maybe I'll write an epilogue for this one too). The character who is my current point of view is something of an unreliable narrator, because of her post-diamond activities, and she sort of knows she's unreliable, which makes it interesting to write.

So, at current, on November 20, I'm at 36,874 words. It is a facet of my first drafts that I overwrite, and then need to take a machete to things, move paragraphs and scenes around, move up the opening, that kind of thing. Though I'm pretty happy with my opener at current.

Also, is it strange that it's taken me this long to realize just how much I like writing dialogue? My dialogue, with these characters or these types of characters, has been getting good response from readers, and good reaction from my writing workshop if I happen to read a scene.

For your amusement, there were some days I wrote a lot and then watched Worst Cooks in America. Season 1, and Season 9 Celebrity. Which I livetweeted, because as a citizen of the Internet, why not, right? And then I Storyfied them, because I think I'm so damn clever and didn't want to just lose it in the datastream. So, should you be interested, here is Season 1

It's just my right kind of nerdy snarky fun (and I'm never inclined to be apologetic for liking the things I like. I like watching cooking shows. I dunno why. I do cook. I more or less like it. But I don't watch these shows and cook what these people are doing. I watch these shows and then like, make nachos.

And an  update on October submissions: I've gotten some more rejections in, but a lot of my stories are still pending. Two of them are being held for further consideration, which makes me very excited and I want to tell everybody but I'm also hesitant to tell anybody because I don't want to jinx it.  I also don't want to get mired in superstitions and paralyze myself, so this is the compromise, I'm telling you it's happened but not what stories and what markets.But I do hope to  have good news along those lines very soon.

(really, I have to hope for that ,or I wouldn't keep submitting stories, right? Right.)

Are you doing NaNoWriMo? What are you working on?