Last weekend, for Christmas, I drove to New Jersey and back to spend it with my grandparents and family.

I do a lot of thinking while driving because really, what else are you going to do? I mean, I talked to the dog some, but she just laid on the back seat, and it isn't like I could turn around to look at her, so no input there. 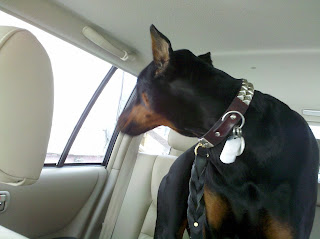 (not representative of our most recent trip; she now has a harness with an attachment that a seatbelt goes through)


One thing I think about, while driving, is the amazing amount of trust that we put in other people. Especially on the Garden State Parkway, where, depending on the time of day, it is literally not safe to travel at the speed limit. 55 (north of the Driscoll Bridge, anyway)? There are people easily going 80, and 90. You may or may not be safe sticking to the far right lane, at 55, and even then, there are people entering the highway via on-ramp. So. Trust.

Then there are the state police, who are going easily that fast as well, and frequently not pulling anybody over. Speed on its own isn't what's unsafe (well....), but speeding, swerving from lane to lane, passing far too closely, and riding the bumpers of those who aren't comfortable going 85? Yeah, that's not so great.

Getting into the car, one assumes that others driving, by merit of existing there, are safe. More or less. I'm not saying I'm one of those "unsafe at any speeds" people like Ralph Nader, but I do think about this sometimes. Other drivers are, frequently, idiots. Even around town. I just got back from a short jaunt to the post office and the grocery store, and nobody had informed me that it was Stop Sign Optional day. I wish I'd know; I would've stayed home. No, no fender benders occurred, but by the time I was on my way home, I was firmly convinced that I was soon to witness something awful occurring.

And now, because this is a writing blog, the tie-in. You assume, when you hold a person's book in their hands, that by merit of them having been published, that book must be of a certain level of quality. Much like those cell phone chatting, swerving at 90 MPH drivers, that isn't necessarily the case. Self publishing has opened a tremendous can of worms, while also opening up the world to writers of merit who would not otherwise have made it to print. Heck, the New York Times best seller list is apparently political, which I in my ignorance did not initially think. But, when I saw Artie Lange's Too Fat to Fish on it, and see James Patterson's near-monthly offerings (well, offerings written by somebody else with his name really big on the cover), I have to admit that merit is not necessarily what gets you in the New York Times.

Reckless drivers haven't necessarily been caught yet. Bad authors....well, there's no accounting for the taste of bad readers, as well. Everything I read doesn't need to be a classic, but too many adverbs, and I put the book down. Too much stilted, simplistic dialogue, and I'm done.
Posted by Jennifer R. Donohue at 4:17 PM