The library can be busier some days than others. Also more sane than others. These three stories are all from the same day. The picture from the week prior, of one of the library puppets, discarded corpse like on the floor of the children's room. 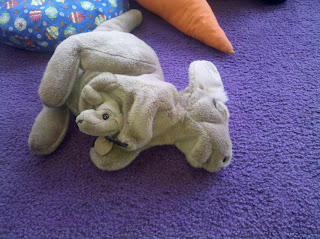 A gentleman was getting photocopies of some news articles. He commented on an article in the paper on how surprised our city had been on the overwhelming response for a job posting. He then started waving his hands and talking about Ted Kennedy, and what Ted Kennedy has been saying. That's where I interceded; my coworker was starting to look a little deer in headlights.

"Isn't Ted Kennedy dead?" The guy just looked at me. The patron behind him, sensing a respite, nodded.
"Yes."
"Well. Then he isn't saying anything, now is he?"
"I can see I'm surrounded by liberals. I'll keep my mouth shut." The guy then paid for his copies and left. Not angrily. But apparently I'm a liberal for mentioning Mr. Kennedy's death.

Close to closing, I answered the phone.
"My husband is reading a book and it's due today and he has twenty five pages left and has already renewed it twice. Can we renew it again?"
"I'm sorry, two renewals is our limit." Information: A checkout is three weeks. Each renewal is an additional three weeks. I don't know what book this was, but dude had it for nine weeks and wanted longer.
"Well that's it then? He just can never finish that book? Those twenty pages unread and he can never get it again?"
I was stunned a second. Then "Uh. He can....return it late for a 25 cent per day fine."
"Oh, is that all? Thanks!"
Posted by Jennifer R. Donohue at 9:42 PM

Email ThisBlogThis!Share to TwitterShare to FacebookShare to Pinterest
Labels: libraries, working with the public is so rewarding