What is it with people and rocks?

Headed to Salvation Army on a break from work, I glanced through a wrought iron fence I'd looked through before, and saw something I hadn't seen before: a few rocks, stacked up. I continued on my way but, amused, I took a picture on my way back. It's either artsy or crappy, I'm not sure which; I took it with my cell phone, forgive me. 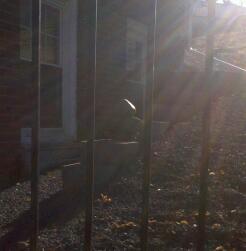 Of course, after I returned to work, I then spent time idling my thoughts over such a thing. Rock formations, monuments, and art are kind of a common thing.

I'm not saying the itty bitty rock pile that I found could be construed as having religious significance; for all I know, it was a modern hobo sign about the dental office adjacent. But, stacks of rocks referred to as "cairns" have been used since prehistory for things like burial sites and ceremonial areas. There is also, I hear tell, a Jewish tradition of bringing a rock to leave on a gravesite that you visit. Being Catholic, I hadn't heard of this until I read Ragtime, and Houdini is described as having visited his mother's grave so frequently that the multitude of stones was overwhelming (or something similar, it's been a few years since I read it).

There's also, of course, Stonehenge.  That site has religious significance, and it has something to do with astronomy. Or something. It's a powerful site, and the time, intelligence, and manpower that went into creating it is still pretty awe inspiring.

Stonehenge's people left no written record. It doesn't mean that they weren't telling a story. Stone sites like those are also good leaping off points for story thoughts; meditations on significant events, purpose, aim. What kind of people were they? Was everybody into it, a believer? Or were there people who were just kind of....Stonehenge on Solstice sorts of people?
Posted by Jennifer R. Donohue at 2:11 AM