Up: a Mother and Daughter's Peakbagging Adventure might seem like an odd book for me to have chosen. Really, it kind of is. I don't have little kids. There aren't dogs in it. I'm not from New Hampshire. I'm not into hiking up mountains. I mean, I'm not against hiking up mountains, it just isn't a burning passion for me. 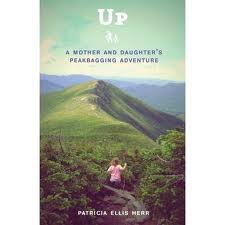 The book happened into my hands at the library, as books so frequently will. You see, when we get new books, they come to use from what is essentially our book warehouse, and then they go upstairs to the offices to be processed and barcoded. Then they come down on a delightful little cart and a piece of paper gets slapped on there that says "new books!" and the staff get to look at them before sending them to their waiting patrons, or putting them on the shelf. Up did not have any waiting patrons, and it had a compelling, easy to read style, and a good hook at the beginning. I took it home and devoured it.

Up is about Herr and her daughter, Alex, and their hiking. Or "peakbagging", as they apparently call taking a trail to the peak of a mountain. The general plan was doing "four thousand footers", which is apparently doable, round trip, in a day. Even with a five year old. Yup, that's right. Herr's daughter, Alex, was five and a half when they started their peakbagging shenanigans.

Alex is a smart and dynamic little girl. She and her little sister, Sage, are home schooled by Herr (she doesn't go into the reasoning, but before having children, she was  PhD candidate, and apparently her husband works at MIT, so it's not like they don't have the chops), and encouraged to be inquisitive and active and make their own decisions. Which extended to this level of hiking.

The book was a brief and digestible pleasure to read. The environments they spend their time in are beautiful and sometimes less than forgiving, but no real tragedies befall them. Herr is in fact a smart woman, and a smart mom, and there are no times at which I was smacking my forehead and yelling "Don't go in there!" at the book. Her husband sort of takes a backseat in the book, but he's obviously a good man, and has significant influence on their daughters. The girls are...well...little kids. But also smart and lovely. I'm sure they're going to grow into fantastic adults.

Posted by Jennifer R. Donohue at 2:00 AM