I was stealth evangelized by a twelve year old

So, at the library the other day, I helped a younger patron, a boy I'd say was twelve or so. He finished his transaction, efficiently and politely (which is more than I can say for some adults I deal with, certainly), adjusted his HUGE backpack, and rested his hand on the counter briefly. Then he looked at me and said "That's for you" and left.

I looked at the counter, and thought "did that kid just give me ten dollars?", a "lol wut?" moment if ever there was one. Then I picked it up. It was a Billion Dollar Bill. 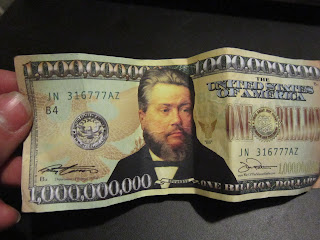 I was amused, and then confused, as I examined the item further. One of the little seals on the front says "Thou shalt not covet". Ooh, he got me. I wanted money. Then I turned it over. Apparently, I'm going to hell.


I think that people who evangelize need better line editors, because while spelled correctly and without grammatical error, the overall message lacks cohesion. Besides the fact that, while I can't recite the Bible word for word, I'm pretty familiar with large chunks of it. And I remember Jesus saying a lot about being good and reasonable, and even forgiving, and not judging. I don't remember Jesus saying very much about hell. 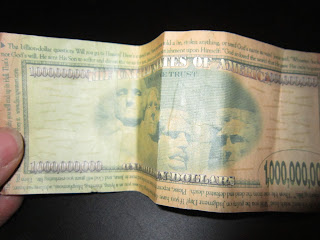 Of course I read the message on the back aloud to my coworkers. In a Southern accent, because that is for some reason what I think of when I think about evangelism. It isn't really correct, but it is a fun thing to do. If only Elka was there to Testify! for me at the end. Can dogs be Saved? Probably not. 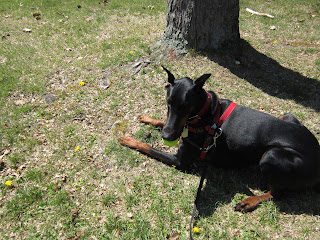 Don't tell her. She's better off not knowing.

So, I don't know why I was the object of this evangelical experience. I mean, that kid didn't know that I'm working on a "faith healer" trick routine with my Doberman. So far, she can "Testify!" and "pray with me".  Perhaps because I wear black a lot? Perhaps because my shirt said "What happens at the library stays at the library"? I didn't think I had that "needs to be Saved" aura about me in particular. Maybe the kid had a quota? Maybe his mom checks his pockets to make sure he has no billion dollar bills left at the end of the day, and you can't just throw things like that out, because Jesus Will Know.

And then you'll go to hell. Unless you accidentally evangelize the garbage men.
Posted by Jennifer R. Donohue at 12:40 AM

Email ThisBlogThis!Share to TwitterShare to FacebookShare to Pinterest
Labels: Bible, Christianity, Doberman, dog, evangelize, hell, I don't think that means what you think it means, library, saved, Southern accent, testify, working with the public is so rewarding