I really should blog more than once a month. You think? I think. Here's my best Elka picture to make up for it 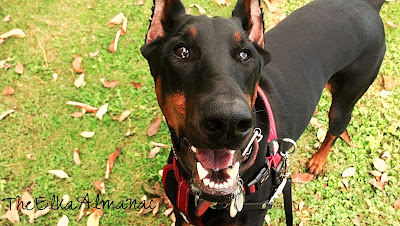 Anyway, I wrote a short story in August, bringing my total "new fiction" count for 2016 to 11. Two of those are novellas, one is a novel, and the other 8 are short stories. Some of those short stories I've already edited and sent out (and had rejected), others still need more time to "cure". The one I just finished doesn't need very much, I don't think. But, I finished it literally five hours ago. I might feel differently even tomorrow.

But that sort of beings me to another point. I intend to once again do October Submissions this year, and considering the turnaround time on some markets, I decided earlier in August that I would hold off submitting more things until then. Unless a market like Fireside spontaneously opens  and closes between now and October, I think I'll hold to that. Plan out what I want to send where, get some editing and polishing in, and there we go. From last year's October Submissions, sparse though they were due to unforeseen medical issues, I still have one left on submission. So we might get to have a Story Submission Birthday, come October 4! Isn't that exciting? I'm excited.

(Seriously, Tin House, I love you and would love to hear from you either way. Rejection doesn't mean we can't be friends.)

What will I write next? I don't know. What will I write for NaNoWriMo? Dunno. It's too early to plan for it. If I start this early, I burn out on the deferred excitement of planning with no payoff. And as you might have noticed, I'm not really such a planner. Or a plotter. I'm not even sure what I'm going to edit/polish/rewrite next, though I need to get it going with some of this year's stories if they're going to start the submission rounds.