Atomic Clock: Yet another misleading name

So, my nuclear accidents post got me thinking. Or I never stopped thinking, really, but it's a corollary, honest.

At the library, you wouldn't believe (or maybe you would) the conversations that we had with people, ad nauseum, about what time it really was, whether their computer time was actually up, whether it had actually started yet, etc. etc. So, we got radio controlled atomic clocks. I'm not sure where the radio is, but if the batteries are good, these clocks update themselves. Daylight Saving time, being activated for the first time, whatever. Eastern time of whichever necessary stripe, via cosmic rays. Radio waves. Whatever. 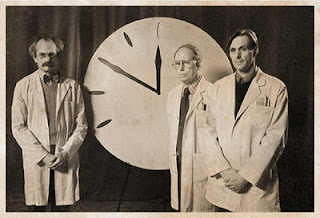 (picture from a random Tumblr page that says it's from the Watchmen movie.)


But. I find the name to be a little bit odd (direct corollary to my Words Unsaid post). When I first heard of atomic clocks, I thought of the other atomic clock, the "we're going to blow ourselves to Kingdom Come" atomic clock: the Doomsday Clock. It's also apparently not just nuclear anymore, but also includes that lovely double header of global warming and biologic threats.

The closest the Doomsday Clock has ever been to Midnight (according to their timeline) was in 1953. The United States had developed and tested the Hydrogen bomb, and Soviet Russia was hot on our heels. The furthest the Doomsday Clock has ever been from Midnight is 17 minutes, in 1991. The Cold War was over, and the Strategic Arms Reduction Treaty cut back on both America's and Russia's nuclear arsenals (for which you can read a very interesting chronology of here on FAS.org, which is the Federation of American Scientists.)

I have my own tribute to the end of the Cold War in my house: a piece of the Berlin Wall, which I purchased at Salvation Army for $5. The kicker? The clerk at Salvation Army didn't seem to realize what she was selling me. It was in a glass case, accessible only by employees, marked "All items on this shelf $5". The exchange was brief; she said "May I help you?" and I said "I'd like that piece of the Berlin Wall!" Her eyes glazed. I said "That plastic thing with the rock in it." I gave her my $5 plus tax and left, burdened with a different type of sorrow than that which Soviet Russia wrought. 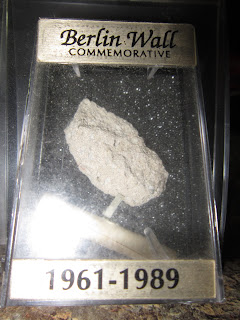 (Though in a way, it reminded me of the Neil Gaiman short story where the old woman buys the Holy Grail at her local Goodwill or whatever they call them in England.)
Posted by Jennifer R. Donohue at 12:00 AM