The Things We Carry

To date, I've enjoyed Tim O'Brien's book The Things They Carried the best so far as Vietnam writings go. I'm not sure if it could be properly called a novel, or essays, but I tend to read things as fiction anyway, so it doesn't bother me any. It's some of the finest prose pertaining to wartime situation that I've read, though not all of the stories contained happen in the Jungle, but a serious book too in its somewhat dreaminess, not like Catch-22 (which was about World War II but still somehow funny) or Matterhorn (which got too big for its britches and was equal parts too serious and too slangy), or The Short Timers (if you've watched "Full Metal Jacket", you know The Short Timers) or Generation Kill (book and miniseries are about equivalent).

The title is both literal and figurative. What I've been thinking about is the same way. 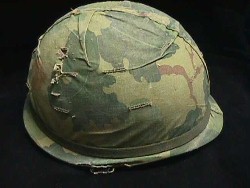 Norman Bowker carried a diary. Rat Kiley carried comic books. Kiowa, a devout baptist, carried an illustrated New Testament that had been presented to him by his father, who taught Sunday school in Oklahoma City, Oklahoma. As a hedge against bad times, however, Kiowa also carried his grandmother's distrust of the white man, his grandfather's old hunting hatchet. Necessity dictated.

Physical thing: hatchet. Figurative: distrust. Literally: carried. Humped in their rucksacks, as the military jargon goes. Figuratively: what these things mean to you. Why carry comic books in your backpack in a jungle, where there are mines and VC and people to shoot at you (and tigers, in Matterhorn. I haven't verified whether this is ridiculous or not)? Comic books are fun, lighthearted. They take you away. Books take you away from where you are, they transport and transcend.

What do you carry? I have a bad habit of keeping too many things. It seems as though most people, when they reach their adult life, haven't necessarily collected as much stuff as I apparently have. I get attached, though; a lot of people do. And I pick up more; a lot of people do. Example: I have my own rosaries. My white one from my First Holy Communion. My dad's black one from his First Holy Communion. My great-grandmother's. Then I have once I've "rescued"; a small blue one in a pleather pouch from Salvation Army, a red one with gold colored adornments from an antique store in Albany.

Do I pray the rosary? Not very often. Am I Catholic? Yes. So, rosaries are important to me, and I have a respect for them, and also a family history with them. They shouldn't be in the five dollar bin at Salvation Army, not any more than the piece of the Berlin Wall that I got, but the two objects don't have the same value. The Berlin Wall was world history; by all rights, I should remember seeing it come down on the news when I was little, but I don't. Thinking back, the country maps of Europe and Asia looked different in Elementary school than they do now, but did anybody tell me that the Soviet Union fell? Not that I remember; it wouldn't have meant anything to me then, I don't think. Now, though, it seems like it should be part of my history, something important that happened during my generation. So I carry that.