Book Review: No Plot? No Problem! by Chris Baty

National Novel Writing Month is only a week away!

30 days, 50,000 words. If you're not in the habit of writing, it sounds rather imposing. If you are, it sounds like cake, doesn't it? But is it, really? A novel from start to finish, the length of The Adventures of Tom Sawyer or Of Mice and Men?

Maybe it's easy. Maybe it isn't. But Christ Baty, National Novel Writing Month's founder, wrote a book to help you out. 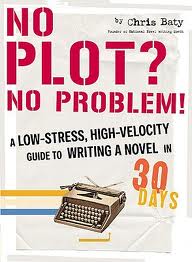 No Plot? No Problem! Is a short book but, well, Nobember is a short month. If you don't already "know how" to write a novel, this book won't tell you how. But Baty gives you some pointers as to how to "turn off your inner editor" and let your hair down, so that you can just spill the words onto the page, damn the torpedoes!

A particular line I like from No Plot? No Problem! is particular advice regarding the notion of letting go. Baty suggests that, perhaps, you could make a pact with yourself to destroy the novel after you've finished, without showing it to anybody: "destroying your novel before anyone reads it will give you a sexy allure that's part Zen letting-go and part Jimi Hendrix writhing over his flaming Telecaster."

Now that's an imagine I like; "land of the free, and the home of the brave", because who doesn't think of the Woodstock "Star Spangled Banner" when guitars on fire are mentioned? Though apparently that's one those things that actually aren't true, because I just watched the video on YouTube and it wasn't then. Wikipedia tells me it was during 1967, in England, as a publicity thing. Ah well. The stories we tell ourselves, right?

But, I'm off the point. No Plot? No Problem! despite its attachment to pushing chocolate on its reader, gives good advice on this hedonistic sort of writing. There's advice on letting yourself take breaks, and scheduling days in which you can set aside a big chunk of time in which to write. There's also a week by week breakdown of where you should be throughout the month. It's a quick read, and instructive one, should you want to see what this NaNoWriMo craziness is all about.