I have two improbable exceptions to this: Dog the Bounty Hunter (I know, right?) and cooking shows. I love Japanese Iron Chef, I love Hell's Kitchen, I love Masterchef.

But "regular" reality TV? The Real World, Jersey Shore, Survivor? No, thank you. I'm from the Jersey Shore, and that's not my reality. It isn't now, and it wasn't while I was there. But I loved the Bones episode about it. 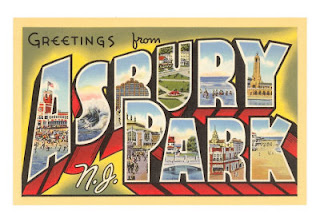 I'm kind of a weirdo when it comes to "true" stories. When I read non-fiction, I prefer it to be written in a narrative style, or I'm typically not grabbed by it.

Also, remember that big deal a few years back when, *gasp* A Million Little Pieces by James Frey wasn't a completely true story? Didn't care. For me, memoirs and biographies read like fiction anyway, for the most part. But a lot of people were upset. Oprah made him cry on the air. A tiny, white-haired woman came to the library front desk, leaning heavily on her cane, and shoved the book across from me (making the "disgust" face, if you've watched Lie to Me), and said "I was so. Disappointed."

Until then, I hadn't read A Million Little Pieces, but okay, I bit. And wow. I finished it, which is more than I can say for Naked Lunch (and I still bear a grudge against William S. Burroughs for that one), but that was a brutal and sordid book. It was decently written, and entertaining. So what was the big deal? Was it because people felt "fooled" or "tricked"? Would they never have read it, had it been marketed as fiction?

Really, though, when I watch TV it's for the escapism of it. I want to see stories that wouldn't be a part of my life. I loved The X-Files for its entire run, and yes, that includes the most recent movie. I really like the show Lie to Me, recently discovered, and of course cancelled. I own all of Lost (thank you, honey), but sadly, regretfully, haven't watched all of it yet. I want creative, fantastic, and ridiculous, which is one reason Dog the Bounty Hunter still appeals; it might as well be fiction.

If I want a book that's my life, I'll write my memoirs, but probably won't read them after editing completes. Why should I? We like the familiar, and frequently crave it, but the familiar doesn't light up my imagination and make me wish I had a notebook. For that, I need the fantastic.
Posted by Jennifer R. Donohue at 5:19 PM