Sometimes, people ask me where ideas come from. And sometimes I don't know.

Other times, I can truthfully say that I've gotten inspiration from reading the news. I know I'm not the only one. 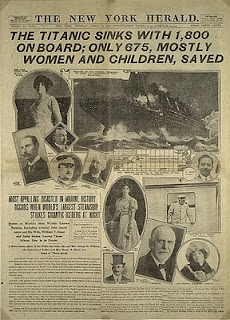 In my "Introduction to Creative Writing" class in college, we read Robert Frost's poem, "Out-Out-!" With the poem, my professor also passed out a reproduction of the newspaper article that has inspired the poem.  You see, a few month's prior, a local boy had lost his hand, and subsequently his life, in an incident with a buzz saw. So, there followed the poem; both a retelling of the events and an imagining how things may have occurred.


I thought this was a really neat thing, a peek at the "man behind the curtain". Looking in the news to write fiction, who'da thunk it? I didn't much read the news before that class. After, I would at least look at the headlines. Now, I click through the New York Times, and the LA Times, and the Boston Globe, both to be up on Big News, but also for those little kernels of thought that might turn into something different, something mine.

So, if you ever have the dreaded writer's block, or you just want to "stretch your legs", as it were, and do something different, I suggest looking at headlines. Read foreign news. Read local news. There's weird stuff there, there are every day things there, and there are eternally told stories there. And there is horror, and science fiction.

A few examples from recent news:


T. Rex Was Bigger Than Thought

German Sailor May Have Been Eaten by Cannibals

Whether you read the full articles or not, do you think there's at least one story there that you can write? Can you get a book out of it? What about a poem? The veracity of the news source doesn't matter in this exercise, just the spark of inspiration. The next time you're stuck, or bored, give it a shot!
Posted by Jennifer R. Donohue at 4:34 PM