Bang Bang (My Baby Shot Me Down)

I threw away my rejection letters.

It was a rather satisfying, if not cathartic, experience, which I of course promptly Facebooked, as one does. There's more to that end of the story, which I'll tell you one day.  But today we're going to talk story submissions, and rejections. 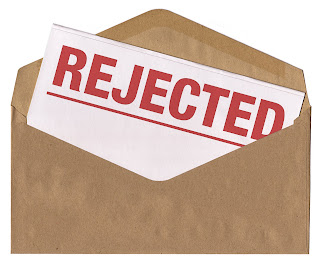 My swiftest (16 days later) and briefest (twelve words) rejection letter came from Cat Rambo (who I'm now following on Twitter, but still doesn't know who I am) at Fantasy Magazine. It was also without question a personal rejection, which is something, I assure you, authors crave.

No to this, but I look forward to reading more from you.

I was actually really flattered to have a personal rejection, and had never had one before. I sent the story off as a lark, and would have been surprised as hell if it was taken right off. I'll read it again, eventually (this happened in 2008) and send it someplace else.

The rejection letters that I threw away were all form rejections, no personalized ink on them, not the date, nothing. They weren't even full pieces of paper, more like 1/6 of a sheet, something printed off en masse and cut up to be sent winging away home in self addressed stamped envelopes. I kept them for awhile, for years, perhaps thinking of the railroad spike on which Stephen King described keeping his rejection letters in On Writing. We know how that story went, of course.

After awhile, though, those letters just kind of made me angry. Or disappointed. They made me doubt what I thought I wanted, and what I thought I wanted to write. It was nothing personal, of course, but that was part of the point. When writing well, we're all writing for ourselves. But when we rewrite, and edit, we think of who else might read the story. Printed rejection letters are insulting in their impersonal nature, because writers want to feel brilliant and important. Printed rejection letters are also necessary, because of the volume of writers who are not brilliant and important.

Submitting a story to a magazine takes courage, and is also such a casual thing to do. It's a matter of sending a properly formatted email (read submission guidelines. If nothing else, this is the important message to take away. Know the rules of the target of your submission), or dropping a letter in the mail. And then you wait. You look at the magazine's web site, to check their typical turnaround time, and to look at what your pay day might be, if you were so lucky. And then you get the email, or your SASE, and it was all nothing. The suspense, and the hope, and your pride in what you'd written, didn't matter. Or at least didn't matter at that time. Try again.

I was going through things, and I found those letters. I started to tuck them away again somewhere, and then stopped. You know what, I thought. Fuck 'em. And threw them away.