Well, I was going to wait. But why not talk about Bruce Springsteen?

In my previous post, "The Order of Things", I discussed having a novel that was inspired and influenced by Bruce Springsteen's "Jungleland".  Off of the Born to Run album, which is hands-down my favorite, it's also, I think, the longest song. It's about love and betrayal and being desperate, and all the things that go on at night. 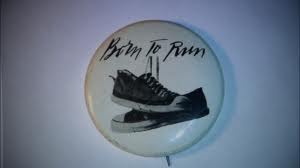 My nascent novel is in post-apocalypse America, and don't start with the anti-New Jersey comments. Just because I don't live there now doesn't mean I grew up thinking "wow, this place is a hole and I need to get out." Because I didn't. I really rather like my part of New Jersey. If I'd grown up in North Jersey, I would have felt that way, because if you live in Elizabeth instead of just rolling up your windows to drive through it, that means you got used to the smell.  But anyway, the apocalypse was of an (of course) unexplained and sort of supernatural bent, unfortunately similar to S. M. Stirling's Dies the Fire, though I didn't read that until more recent years.

But, much like my suggestion with the Adrienne Rich poem, ten different people can take the lines of "Jungleland" and write ten very different stories:

Bruce Springsteen has quite a lot of songs by now, but you can always count on him to write along a certain thematic vein. He writes about promises, and about hope. He writes about love, and about trust, and disappointment. He writes about friendship. The music that you hear, even when there are no lyrics, talks about these things as well, and I don't know how Bruce Springsteen and the E Street Band will continue without the Big Man, Clarence Clemons, playing that saxophone. So many things would not have been the same without him, from the stage performance right down to the bones of the music.
Posted by Jennifer R. Donohue at 1:39 PM