Very Superstitious, Writing's on the Wall

A lot of writers have superstitions. They use a particular pen, have good luck charms, have little totems that they keep around to aid in the creative process.

While I can appreciate the need (and fondness) for trinkets of that sort, I try to do the exact opposite. I try to be able to write wherever, whenever, however, because I don't want to find myself stuck if I don't have a pair of fingerless gloves on, or if I left my plastic quarter-machine Doberman at home. I really don't want to cultivate precious habits like that, or I'll end up like Roseanne on that episode where she started to go to Bingo games and ended up with all kinds of lucky lighters that she had to arrange in a pattern in front of her. 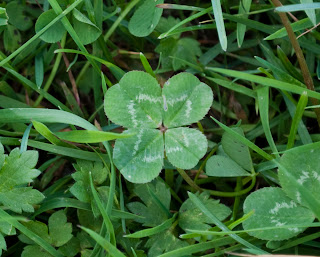 Now, this isn't to say I don't have particular writing habits.

For instance, if I've just finished a burst of writing and hammered out a few paragraphs, and then need to pause, rather than stare at my blinking cursor, I'll tab over to play a game or two of Snood. Mahjong or Pinball work as well; pointless little computer games that keep my synapses firing while the storyline stews. Once my next point or sentence floats to the surface, it's back to the text document I go!

I also frequently have a "writing playlist" going, whether it's a mix CD I burned or a collection of MP3's I strung together on the fly. The first of these is still mostly intact, and a car CD currently. It includes songs I was listening to at the time (2007, if I remember correctly, for my first NaNoWriMo), but also songs I've since become attached to and added, ones that I thought fit in the flow, etc. Can I write without this CD? Yes. Is it nice to write with this CD? Also a yes.  Further, I've discovered that YouTube is a great place to go if you have a particular song you want to hear but don't know where the CD it's on is. Or don't own the CD.

I frequently get ideas for stories, either new or works in progress, as I fall asleep. It behooves me to have a notebook and pen by the bed, or at least my cell phone, so I can text or email myself the gist of things, so they aren't gone forever. Is this a superstition? No, that one's just plain sense. Have I occasionally scrawled something in the dark that didn't end up being a jewel from the gods? Well, yeah. But it was great for my piece of mind!
Posted by Jennifer R. Donohue at 1:03 AM