This might be a morbid or macabre thing to consider, but what's your favorite ruined city?

I had this discussion with a friend the other day, because his favorite ruined city, Krakatoa, was on the cover of Archaeology magazine. My favorite is Pripyat, in the Chernobyl exclusion zone. It's occurred to me that it's a special sort of group of friends that you can have this sort of conversation with. 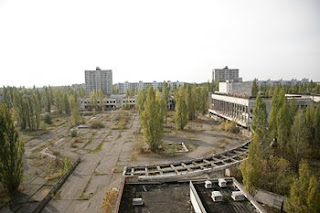 (photo from Wikitravel)
There are a number of reasons I'm so fascinated by Chernobyl and Pripyat, all of them normal, I'm sure. For one thing, it was just such a big deal. The disaster itself, the closed-mouthedness of the Soviet government, the evacuation, the people who went back (or never left). All of it is just so complicated and fantastic (meaning, "from fantasy", not "wonderful").
How could such a thing happen? How could a government not tell anybody? Of course, we just had a not-so-refreshing redo in Japan in March at the Fukushima Daiichi Nuclear Power plant. On the national "Bad Nuclear Shit Happened" scale (my name for it, it's really the International Nuclear Event Scale, or INES), both Chernobyl and Fukushima are rated at 7.
So, nestled in modern day society, between Belarus and the Ukraine, there is a 30 km "exclusion zone" that to see picture of, looks like a post apocalypse movie. Some people go in to scavenge. Some people go in to poach wildlife (which sounds like brilliant planning to me). PBS just made a documentary called Radioactive Wolves.
There is a web site which may or may not be a hoax (I've heard the pictures are genuine, just the story that accompanies them is false): Kid of Speed. You expect to see zombies staggering around. Or see Mad Max drive up. I could just sit here and free-associate stories about Chernobyl all day, that's how captivated I am by the whole package.
So, I showed you mine. What's yours?
Posted by Jennifer R. Donohue at 2:43 PM