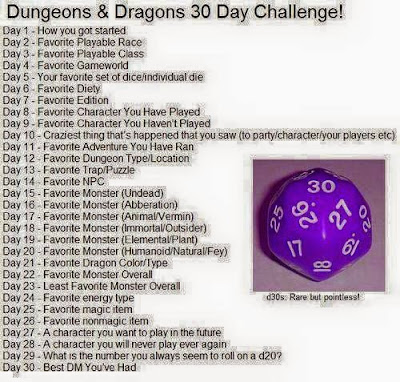 I don't know if I'd considered before whether I had a favorite magic item. But in a way, of course I have.

It might sound silly, but one of the favorite things I've ever had a character have was the +1 longsword named Hoardmaster from Gorgoldand's Gauntlet, that Brigid got in the Return to the Temple of Elemental Evil (Hoardmaster was kind of the payoff for losing that bastard sword). She used that sword for the entirety of the adventure (it didn't stay +1, but those changes come from one of those places where Jim blurred the adventure path and his elements of story and setting).

But other than weapons and armor, there are a lot of really cool magic items. I'm a particularly fan of the "wondrous items" category thereof, where you find things like the Bag of Holding (an extradimensional space wherein you can put much more in it than appears possible) and the Portable Hole (same deal, Loony Tunes style). The Ring of Sustenance makes it so you don't have to eat and drink, and you don't really have to sleep either (something like 4 hours a night?) It's a boon to the badass adventurer, to not have to carry such resources as food and water, or have to deal with the details of having to sleep very much if you're in a particularly dangerous area. Another item Brigid had were Gauntlets of Ogre Power, which made her rather mediocre strength into something far more useful to shoving that lovely specialized sword through things.

I had a barbarian named Esfir (she was in the same game as Otl and, as a side note, I was particularly pleased with the name "Esfir" for some reason) who ended up with a Ring of the Ram, which if I remember right she once used to ram an enemy off of a boat and to his watery grave. Kate Walker had Goggles of Minute Seeing, which, well, let you look at little things. Slippers of Spiderclimbing are an item I frequently want but I think have only had once. They let you walk up walls!

But, much like our homebrew campaign worlds of which I am so fond, I also tend to like homebrew magic items. Sometimes little low powered things can be much cooler than the "same old same old" from the published books (like the dragon wing cloak Brigid had which let her fly, a variation on the item Wings of the Bat, or the dragon skull helmet she had which gave her darkvision). That, and we frequently have more low-magic campaigns, so we aren't exactly dripping with magic items by third level or even fifth. And in 5th Edition, there are far fewer magic items across the board, which is an interesting decision on their part, I feel.
Posted by Jennifer R. Donohue at 12:00 AM