Run With the Hunted preorder

Happy October, everybody, I have a surprise for you!

My cyberpunk novella "Run With the Hunted" is available for Kindle preorder! The release date is October 31, 2018. 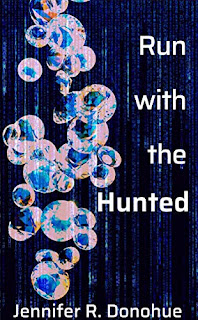 
I said this on Twitter, and I'll likely post about it at greater length at some later date, but "Run With the Hunted", in my head, takes place in the same near-future as "Daddy's Girl" and "Surveillance Fatigue". This isn't to say that the characters in those previous stories are involved; they aren't. Another notable difference is that the characters in "Run With the Hunted" all have names! But, it was a lot of fun to write, and I really enjoy the characters of Bristol, Bits, and Dolly, so hopefully I'll make a habit (series) of this.
Posted by Jennifer R. Donohue at 9:40 AM 1 comment: